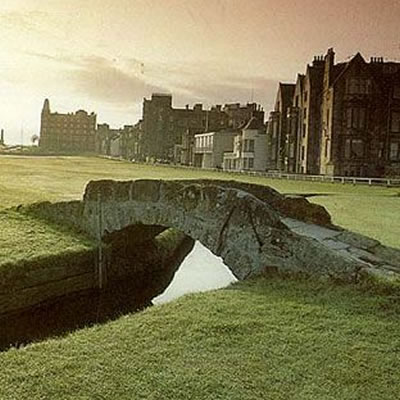 When visiting St Andrews it’s always a challenge to plan what to see and do, there are so many attractions in the area. We thought we’ make life a little easier by talking through 5 of the most famous sites and landmarks of St Andrews, all of which are definitely well worth a visit.

1) Museum of the University of St Andrews

Often abbreviated to MUSA the Museum is a recent and welcome addition to St Andrews, having opened in 2008. The Museum hosts over 112,000 artefacts relating to St Andrews University, which is now over 600 years old.

There are four galleries within the Museum these are:
a) Scotland’s First University – This covers the founding of the University and its earliest days
b) Living and Learning – This covers the various aspects of student life at St Andrews University
c) Seeing and Believing – This is a tribute to the Alumni of St Andrews University and what they went on to achieve in history around the world
d) Temporary exhibitions – The fourth gallery features a range of short-term exhibitions and displays ensuring return visitors always have something new to see each time they visit

The first castle at St Andrews was built around 1200AD and needed to be rebuilt numerous times over the centuries due to conflicts between Scotland and England. The castle was in active use until 1689 and was the home to Kings of Scotland and numerous other famous people. The Castle is now in ruins, with sizable amounts of materials being taken by the Burgh Council for projects like St Andrews Pier. Today the main parts left are the south wall, the bottle dungeon, the underground mine and counter mine and kitchen tower. Visiting St Andrews Castle provides a fascinating insight into the history of St Andrews. 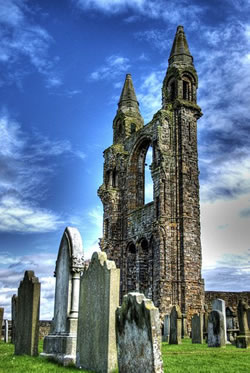 The ruins of St Andrews Cathedral

A trip to St Andrews would not quite be the same without a trip to the ancient St Andrews Cathedral. Constructed in 1158 the Roman Catholic Cathedral was the headquarters of the ancient Catholic Church in Scotland.

The Martyrs Monument is a prominently located memorial for protestant martyrs who died during the protestant reform of the sixteenth century. The monument overlooks the St Andrews old course and is also adjacent to the West Sands beach.

The monument was constructed in 1842 and has inscriptions to four martyrs who died during the Scottish reformation. There is also a panel close to the monument providing further detailed insight and information. Visit the monument to take in a fascinating part of St Andrews history, which won’t take too long and can be blended in to other activities during a day in St Andrews. 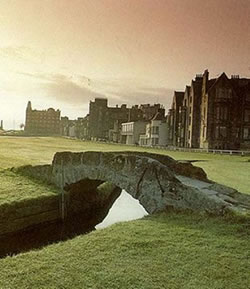 Nobody knows exactly when the Swilcan Bridge at St Andrews Old Course was built, but it’s estimated it was at least 700 years ago, so pre-dates St Andrews golfing days. Originally starting life as a simple bridge to transport livestock across the bridge now is a worldwide iconic golfing symbol.

Golfers and celebrities the world over have paid homage to this simple bridge, no trip to St Andrews should miss a visit to this iconic landmark.

We hope you’ve enjoyed this guide to five famous sights and landmarks of St Andrews. When visiting don’t forget to book your stay at the Number 12 B&B St Andrews!

No12 is a non-smoking house as is all accommodation in Scotland.

Please agree to the use of cookies. We do not store any personal data on our website. more information